WELCOME  TO  THE  HOME  OF  THE  TWILIGHT PRINCESS  ONLINE  NOVEL
Thank you for visiting and we hope you enjoy your time here.

Here's what fans who have and haven't played the game are saying.

When the news of Stephonika's desire to adapt another Zelda game broke, we decided it might be nice to create a site to act as a central hub for it, Twilight Princess, and any other succeeding adaptations in the future.  The site launched a few days ago, and we are completely astounded that we forgot to make a mention of it on the Twilight Princess site here!  You can also find new author info on the site, as we got Stephonika to give us a list of favorites, both Zelda related and non-Zelda related.  It's a pretty simple set up, and we will likely move our list of Misc. writings from here to that site in the future.  Head over to the Legend of Zelda Novels page today, which we've nick-named LOZON! 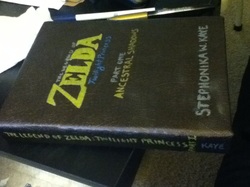 A curious post happened the other day on Kaye's Facebook and DA.  She uploaded a photo of a hardback copy of the first part of her Twilight Princess novel.  This copy is apparently one for her mom as a Christmas gift.  She says that she'll be soon posting an album of works-in-progress photos of the bookbinding process.  This is very exciting because this is the first time we've seen this book actually in print of some kind!

In other news of news we've failed to keep up on recently (apologies):

Kaye has sent off part one to a publisher, around the beginning of November.  Apparently, there's been no word yet on the submission process.

We also still have yet to be told which new LOZ she's working on adapting, but have seen a post where she says that work on it hasn't happened in a while due to her work schedule.  She still promises to drop the title once she reaches 75 likes though.  As of this posting, she's got 63!

Lastly, check out the video below for her in-depth answer to five questions asked by fans, where she talks about things as basic as her favourite LOZ title to very in-depth discussions of characters and how the story and characters changed from the game to make the novel better.

Stephonika stated recently that if she can reach 75 likes on her Facebook page, she will then reveal the title to her next LOZ adaptation.  'Like' Stephonika W. Kaye today to help reach that goal and get her to DROP  THAT  TITLE!!!!

STEPHONIKA  AS  MIDNA?  HER  VOICE-OVER  DUB

There are now two youtube videos available of Stephonika giving voice to Midna.  Apparently, there's even more on the way.  Head to the news room to see/hear the videos!

We have recently posted a new section "Finale News" in the header.  Click there today to get the latest scoop about what we can hope to see in the final five chapters coming out in just a few days!  Stephonika talks about the final showdown and how it was to right some iconic TP moments.

Would you like to see an alternate ending to the Twilight Princess novel?  Sad that Link won't get a girl in her novelization?  Do you want to see a version where Link confesses love to Midna (Ilia, Zelda...)?  Head over to the polls page and cast your vote.  Maybe if we get enough votes, Ms. Kaye will deliver that alternate ending you were dying to see when you played the game!

If you enjoyed the game, and you are looking to expand your experience of Twilight Princess, you have come to the right place.  This novel was written by a fan out of love of the game for other fans who share her passion for the game and its characters.  It is also written so that  newcomers to the series and/or game can understand completely what is going on.

"When I began writing Twilight Princess, it was for the intent to share it
with fans just like myself.  This novel adaptation goes out to every fan,
every hero, and every companion and princess who laughed, cried, and
bled alongside Link.  It is my honour to share this piece of fiction with  all
of you.  This is by a fan for fans.  Keep sharing the love you have of Zelda,
and the legend will continue passing down generation to generation."
--Stephonika W. Kaye

A NOTE ON HOW THE WORK WAS ADAPTED

This is a REALISTIC adaptation of the game.  No hearts to collect, no impossibly vast inventory at all times, and no retries, and rarely a treasure chest in sight.  Some elements of the game have been deleted or altered, and some new events have been added for realism.  You will find much of the game's true dialogue in the game, but just like the events, some dialogue has been deleted or altered, and some created entirely by the author.  The biggest change/addition to the novel from the game is the voice of Link.  Though silent in nearly every game, in this novel he has an opinion, too.

The author of this work does not claim ownership of The Legend of Zelda.  Though this is a straight adaptation of the popular and bestselling video game, it is still technically categorized as fan fiction and does not infringe on Nintendo's rights to The Legend of Zelda: Twilight Princess or its characters.  The author therefore claims no affiliation with the game or franchise or the Nintendo corporation.

This novel and its words are the combined work of author Stephonika W. Kaye and Nintendo.  Copying from the work she has written is still illegal.  It is called plagiarism.  This novel is intended for the enjoyment of Zelda fans and newbies, and we ask that you respect the author and Nintendo and not steal the years of hard work they've clocked on this project.

Lastly, the screen capture above belongs to Nintendo.
twilightprincessnovel.weebly.com founded on 1/12/12